Joseph Brennan was born shortly before the Great Depression, on September 22, 1925, in Regina, Saskatchewan. He was the elder of two children. Joe, as he was called, led a very focused life, but also filled with humour. The rock solid Catholic faith of his parents became a hallmark of his life as a Jesuit.

In the summer of 1944, on the occasion of his first profession in the Society of Jesus, Joe’s parents came from Vancouver to celebrate with him. Tragically, his mother breathed her last in her sleep, on the very eve of his profession. A hard working student, Joe easily completed his spiritual formation, then his classical studies and finally three years of philosophy by 1949. At that point, he felt called “to the frontiers” and went to Darjeeling, India, shortly after India’s independence. 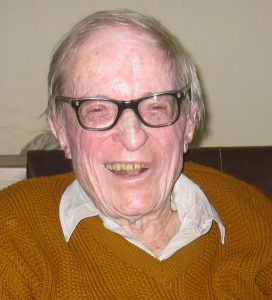 Fr Joe’s first assignment was to attend language school. He quickly learned to speak Nepali, then Hindi. He was always anxious to communicate intelligibly and over the years he became conversant in five or more languages.

Though he began his India assignment in the hills of Darjeeling, it was on the plains (Terai) that Fr Joe would spend virtually all his Jesuit life. He had a special concern for the Adivasi (first Nation) people of the plains. He served them first as a headmaster, then in several locations as pastor, and in his later years as a spiritual guide for seminarians and priests. People consistently received his spiritual counsel with grateful hearts.

Fellow Canadian Bill Bourke SJ, who shared many years with Fr Joe as a missionary in India, wrote of him upon his death: “Different, unique, a true companion on the road with Jesus and His companions.” Fr Bill also relates how Joe always wanted to be a priest—but not a Jesuit! When he was asked why, he would reply: “Because I wanted to get to work soon—and Jesuits have long years of study!” As Fr Bill says, “Here’s a man who, years ago, felt he couldn’t wait to give Jesus to others, but who must have felt deep down that he had to get to know and love Him better before trying to pass on that love to others.”

More recently, skin-cancer and cardiac problems began to take their toll on Fr Joe’s health. Ever anxious to serve, he readily handed over his responsibilities to local clergy and laity. Meanwhile he was always available to clergy, seminarians, seminary candidates and laity as his strength permitted. Well into his eighties, Fr Joe kept in touch with his only sibling, Lawrence, who was also a Jesuit. He also communicated with supporters and others in his extended family through a periodic newsletter … even when typewriters gave way to computers!

In his homily at Fr Joe’s funeral Mass, Darjeeling Provincial Fr Kinley Tshering SJ recalled how Fr Joe would often greet people with the question, “What’s your problem?” If the person replied, “I have no problem,” Fr Joe would say, “Well then, that’s your problem. Now let’s discuss it!” In Fr Kinley’s words: “Fr Joe was truly a man for others and with others. He was humble and simple and very ordinary, and that made him extraordinary, a pillar of strength, of faith and love for Jesus, his Lord and Master.”

May he rest in peace!

On 14 September 2017, a memorial Mass was held in the Loretto Sisters’ chapel on St Mary Street in Toronto to honour and celebrate Fr. Brennan’s life of service in Darjeeling. The presider was Fr J.P. Horrigan SJ, assisted by Deacon Roshan Kiro SJ. A reception followed the Mass. A number of friends, family members, Jesuits, sisters and CJI staff were present.

To offer a gift in memory of Fr Joe Brennan, please

Write “In memory of Fr Joseph Brennan SJ” in the message box. 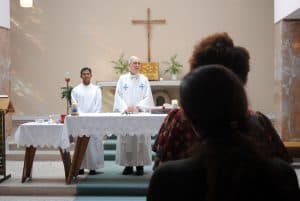 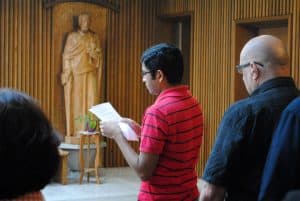 Manu Mathew SJ reads the prayers of the faithful
at the memorial Mass. (Photo: CJI) 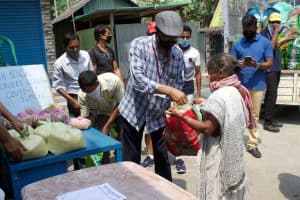 Canadian Jesuits International (CJI) has launched its #FallCampaign, Solidarity in a COVID-19 world, to support our Jesuit partners who accompany poor and marginalized communities and to foster #JustRelations between the Global North and South.​

Please join us for our webinar Solidarity in a COVID-19 world on November 9. We also invite our young supporters and friends to participate in our Youth Advocacy Symposium on October 23-24.​
​
On November 30, we will come together for an online concert Solidarity: A celebration, with international performers to mark the start of Advent as we prepare for Christmas.​​

Please click on the link on our profile to register for any of these events or visit our website: https://canadianjesuitsinternational.ca

Our campaign will highlight four projects: Access to quality education in Nepal; Education for forcibly displaced people in South Sudan; Rebuilding lives, reconstructing homes in Haiti; and Defence of human rights in Honduras.​

Thank you for all your support.

Join youth from across Canada for CJI's Advocacy Symposium – Solidarity in a COVID-19 world. Oct 23-24. ⠀⠀
⠀⠀
Listen to inspiring speakers, participate in meaningful workshops and connect with others who are seeking to build a just future for all. Through solidarity, we can address vaccine inequity, global migration and social and ecological justice issues. Together, we can build a more just world.⠀⠀
⠀⠀
For more information click on the link on our profile or visit our website: canadianjesuitsinternational.ca⠀⠀
⠀⠀
#Y4O #Youth4Others #Youth4Climate #Jesuits #humanrights4all

#Repost @jesuitrefugeeservice
・・・
Today we celebrate World Day of Migrants and Refugees!
.
We pray that our constant and concrete efforts "Towards an ever wider we" will help the entire human family to build a world where refugees, migrants, and all people at the margins, can be full and active participants.
.
#WDMR2021 #TowardsAnEverWiderWe #HumanFamily #Together #WithRefugees

The fall edition of Canadian Jesuits International's newsletter, Bridging Borders, is now out. The theme for this issue is "Youth: Bringing hope and leading us into the future." Young men and women, who work with CJI's Jesuit partners in Africa, Asia and Latin America, talk about their hopes and dreams for a just future for all and the role they play in making it become a reality. The newsletter also gives updates on the work of CJI and its partners in helping marginalized communities in India cope with COVID-19 during their second wave in the spring. Also featured is a Youth Advocacy Symposium, an online event which CJI is hosting in October. To read more, please click on the link on our profile or visit: canadianjesuitsinternational.ca⠀
⠀
#youth4others #Jesuits @aorjesuits @serviciojesuitacolombia @jcicdo

Join youth from across Canada for CJI's Advocacy Symposium – Solidarity in a COVID-19 world. Oct 23-24. ⠀
⠀
Listen to inspiring speakers, participate in meaningful workshops and connect with others who are seeking to build a just future for all. Through solidarity, we can address vaccine inequity, global migration and social and ecological justice issues. Together, we can build a more just world.⠀
⠀
For more information click on the link on our profile or visit our website: canadianjesuitsinternational.ca⠀
⠀
#Y4O #Youth4Others #Youth4Climate #Jesuits #humanrights4all

Want to help after the #HaitiEarthquake? ⠀
⠀
Donate via @canadianjesuitsinternational so our #Jesuit partners in #Haiti can provide emergency relief and long-term recovery, including:⠀
🥫 Food + Water⠀
🏫 Rebuilding schools⠀
⠀
How to give 👉 https://buff.ly/3k9SKAI⠀
⠀
#Haiti #Earthquake #2021 #relief #solidarity

#Repost @jesuitrefugeeservice
・・・
"On the feast of the founder of the Jesuit order, I pray that by God’s grace, our work brings about needed change in these complex times. That our refugee sisters and brothers are able to achieve integration, self-reliance, and dignity. That they are able to find hope."
.
Eric Velandria SJ, Senior Education Specialist in the Programmes and Innovation division of JRS’s International Office.
.
#Ignatius #Jesuits #WithRefugees #IgnatianYear #AMDG

Canadian Jesuits International (CJI) is saddened to hear that Fr Stan Swamy SJ passed away last July 5. For over 50 years, he worked tirelessly for poor and marginalized communities of India, especially its Indigenous people/Adivasis. Fr Stan fought for the recognition of the rights of the Adivasis, documenting the abuse of power against Indigenous youth and those falsely imprisoned for defending their rights.⠀
.⠀
For the last 9 months, Fr Stan was incarcerated based on unsubstantiated charges of links to Maoist/terrorist forces. He suffered from Parkinson’s disease and his health continued to deteriorate while in prison. In spite of his health challenges, the National Investigation Agency (NIA) special sessions court refused to grant him bail.⠀
.⠀
Fr Stan only wanted to be with the people he served. During a bail hearing in May, he declared this desire to the court: “I may suffer, perhaps even die very soon if the deterioration of my condition continues. But whatever happens I want to be able to be among my people.”⠀
.⠀
He was finally transferred to a hospital after contracting COVID-19.⠀
.⠀
Fr Stan’s life and death has inspired a new generation of advocates who continue to fight for truth and justice. These are men and women emboldened by the strength and courage Fr Stan showed. They will stand up for the truth, fight for the marginalized and will continue to dedicate their lives in the pursuit of a just and equal society.⠀
.⠀
As we commemorate the life of Fr Stan, let us not forget the 15 other human rights defenders who have been detained for the same reason as Fr Stan and continue to languish in prison while waiting for justice to be served.⠀
.⠀
Thank you, Fr Stan, for inspiring us all.⠀
⠀
#RIPStan #Jesuits